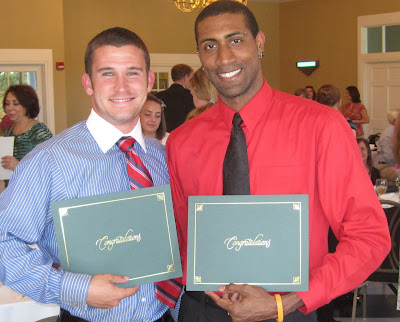 The Coker College Student Services team annually honors students who have been recognized as leaders on the Coker College campus. It was my good fortune to be part of the selection committee for the leadership awards, which is how I happened to be invited to the Leadership Banquet on April 13, 2010 at the Hartsville Country Club.
The students earning recognition at the Excellence In Leadership Banquet, which was planned and coordinated by Lisa Potoka, were from all four classes.
First-year nominees were:
Kira Dobbs, Gregory Keith Martin, Estebon Middleton, and Timothy Strickland
Sophomore nominees were:
Josh Bittenger, Caitlyn Driscoll, Karen Kelly and Danielle Wallace
Junior nominees were:
Taylor Adams, Andrew Caputa, Sarah Folsom, Margaret McCoy, Whitney Wallett and Amanda Warner
Senior nominees were:
Mason Ambler, Sheila Braddock, Benjamin Chastain, Michael Crook, Amy Hall, Jordan Heydt, Jennifer Kyria Hoffman, Henna Koponen, Amanda Naron, Christina Nealey, Robert O’Hara, Tervor Robinson, Gertrude Stoney, Rebecca Sullivan, Daniel Wagner and Jessica Welch.
These students are involved in a variety of activities around the campus and as their personal statement reiterated again and again, Coker College is a place where if you work to help others you reap a great deal of benefit.

There are two major student leadership awards - The REBEKAH Chapman Memorial Award, named for a student who was at Coker from 1984 until her death in an automobile accident in 1986. She was deeply committed to Coker College and represented the best qualities of a student leader. Trevor Robinson was named the winner of the Rebeka Chapman Memorial Award at the 2010 Leadership Banquet.