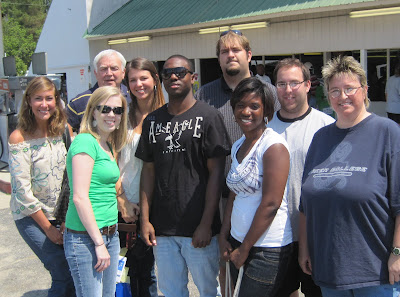 This was, I think, my 10thyear teaching the Coker Communication Capstone Course that we call the Communication Senior Seminar. This seminar is mix of subject areas with the capstone being a research project by the students on some keen interest they have in a facet of the wide world of communication. We finished the 2010 course on April 23 with a lunch at Miriam's Restaurant that is located in Griggs Grocery outside of Hartsville. The first seminar class and I went to Griggs for the end of semester lunch and it became a tradition. We are fortunate that we are getting a new professor to add to our department with the next academic year. We are going to give him the opportunity to teach this Capstone Course and I can say, it is an experience I will miss but I am certain he is going to enjoy.

I believe another post described the different projects the students accomplished this semester but just in case:

Kimberly Wilson, a communication minor and business major, researched the question of narcissism and its relationship to television reality shows. Lance Player researched television habits of college students along with the question of how television might impact college students. Ricardo Smith researched the question of who makes the better celebrity spokesperson -- an athlete or a musician. Audrey Player looked at the influence of television on the question of teenage pregnancy. Rachel Croyle wanted to determine if the perception of marriage within young women has been affected by television portrayals of men-women relationships in regard to marriage. Adam Johnson looked into the question of social and academic worlds of college video gamers. Kate McElveen studied shopping habits of Coker students to see if there are any marketing communication tactics that could change that behavior in regard to shopping in downtown Hartsville. Whitley Echols studied the attitudes of college students toward texting to determine if they knew of the dangers involved. Sheila Braddock is doing our final project,which is investigating gender roles in society.
Posted by rapsc at 4/23/2010 02:12:00 PM