Faculty do some interesting things...

Dr. Rhonda Knight held what we laughingly call an "Academic Karaoke" presentation this past Friday. She had the opportunity to spend five weeks of her summer studying Shakespearean theater at the Blackfriars Theater in Staunton, Virginia. She described for us the learning experience, some of the techniques used with these professors to get them involved in some new material and the friendships that developed during what her group began to call the "Summer Camp" experience. After all, despite most of them being tenured faculty, they were staying in dorms with the bathroom at the end of the hall.

Her presentation sparked a couple of ideas that I may try with my students in some communication classes, even though they may have nothing to do with the Bard. It is really interesting to hear things on which my colleagues are working and it is another one of those happenings that adds to my own Coker experience. At the same time, the fact that Dr. Knight gave five weeks of her summer to become even more of an expert on the English language's most famous word smith so that she could further enrich the academic lives of her students is another proof of the fantastic experience students can have when they join the learning community that is Coker College.
Posted by rapsc at 9/20/2008 09:30:00 AM No comments:

One of the best sopranos anywhere...

Was on stage at Coker this evening in a faculty recital. Serena Hill is such a strong professional. I can't even pretend to talk about her voice or any of the musicality because I don't know those things. But the performance on Thursday night was delightful to the ear and exciting to the eye. Serena has a stage presence that is amazing, conveying meaning with a raised eyebrow that quickly sets the mood for her audience.

One of the things really interesting about this faculty recital on Thursday night was the interesting blend of students, faculty and community people. The concert was held in the recital hall of the music building -- a venue barely capable of housing Serena's strong voice, but an intimate showcase for her remarkable talent.

And, what I really like as a non musical person is the ability to expand my horizons with some of the most professional talent from anywhere in the world. And, it is also so great to see students, whose primary focus is a soccer ball, or a race course being exposed to cultural experiences they never knew existed. That is a college experience and it is so very often the Coker experience.

And, the performance on Thursday evening was just like frosting on a cake because earlier in the day the campus heard from a climate scientist on the latest research on the question of global warming. If you are in Hartsville you and you don' take advantage of being in a college town, you might want to understand what a treasure is in the middle of town.
Posted by rapsc at 9/18/2008 09:38:00 PM No comments: 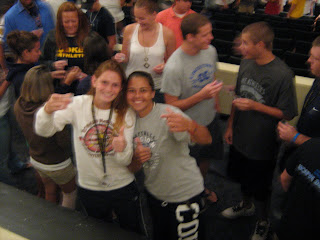 Members of all of Coker's athletic teams received some pretty sobering information on Wednesday night, September 17, as Elaine Pasqua, a member of the NCAA Speaker's Series, shared some thoughts about Sex and Excess. In an informal poll during class this morning the students who attended the talk said they found her an effective speaker who got her message across in a very clear manner.

There was no question that her approach to the subject had the attention of the students and a couple of major audience participation elements helped to hammer that message home. The speaker told her audience that her reason for becoming a speaker on this particular subject was the experience of watching both her stepfather and her mother die of aids. Her stepfather contracted HIV/Aids from a contaminated blood supply and he passed it to her mother. Elaine has made one of her missions in life the goal of not letting anyone else get this disease because of not knowing how things happen. Her personal story helped her solidify the attention of the audience.

In the communication world, we like to think and to talk about tipping points. The speaker enabled a major demonstration of something like a tipping point as she showed how STDs can spread very quicklyacross a population. Starting out with 14 contaminated cups, the students began sharing their liquid with three other people. By the time they were done, more than 80 students had the pink liquid of "disease" in their hands. That is a lesson that should stick.

The NCAA speakers I have had the opportunity to listen to over the past few years have been good speakers with solid programs that get the attention of students and often include meaningful participation. The subtitle of this week's speaker was "Surviving the Party." The information she shared is going to make a difference for some who were in that audience.

The speaker series is,I believe, funded through an NCAA speaker grant and a Choices grant with some funds coming from Student Services and Coker Athletics. All students were invited. 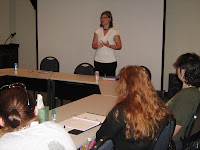 The Introduction to Mass Communication class at Coker demonstrated there is a strong interest in study abroad experiences with their attention to and questions of Jessica Klyn de Novelo of Central College this past week. Darlene Small of Coker's Center for International and Experiential Education provided the opportunities for this speaker. We have had students who have used the Central College program and the speaker did a thorough and quick job of introducing a many of the important elements. After she left several students asked additional questions about these programs and there was also a quick discussion of some of the programs being offered by Coker faculty. For example, one of the students went to the Yucatan with Dr. Hamby this past May and he talked a little about that experience. We also mentioned the trip to Italy that is upcoming, the trip to England that is upcoming and the Costa Rica trip. We probably missed one or two. The students are interested. That day at lunch I spent some time talking with one student about how she might plan a semester abroad experience. This was a case of a short presentation by an outside speaker sparking some interesting discussion. My reasoning for the outside speaker was that the course name is Mass Communication, Culture and Media Literacy and this seemed another good way to talk about how individuals often identify more with their dominant culture when they leave that culture. Thanks to both Darlene and Jessica.
Posted by rapsc at 9/13/2008 12:52:00 PM No comments: 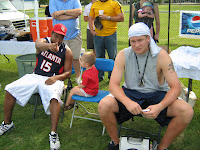 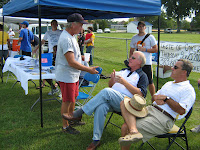 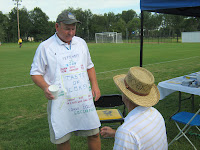 One of the major fund raisers for the Coker College Division II Athletic Teams is the Taste of Coker, which received some great publicity in NCAA publications last year when it was selected as one of the model programs. Tim Griggs, athletic director, and several coaches, players and fans were drumming up support for the Taste of Coker during the Men's soccer match on Saturday, September 6. These are a couple of photos from that day.
Posted by rapsc at 9/13/2008 10:13:00 AM No comments: