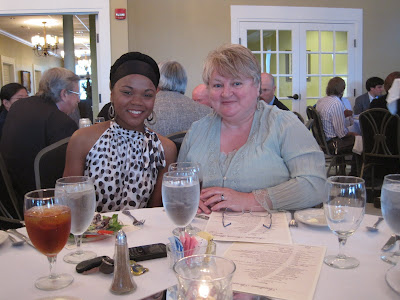 Jessica Barnes, a communication major at Coker College, who actually finished her classes in December was sitting at the same table I was for the Coker College Academic Awards Banquet. I have known Jessica since she came to Coker for a Coker Connection just before she started her four year experience. She was impressive as a first-year student and she has become even more skilled through her undergraduate years. Jessica was one of a number of students recognized for their Academic prowess at the Coker Academic Awards Banquet on April 20.

Jessica spends most of her time these days at the S.C. Governor's School for Science and Mathematics where she has been a resident assistant. And, much of her time the past couple of months has been awaiting news of a Fulbright Fellowship. She is one of two Coker Students who were finalists this year. Anna Lippard, the other finalist, was notified of her Fulbright earlier. Apparently this is a rolling selection process with much of the final decision based in the host country. Jessica is on the short list for a city in China. But, she has not just been waiting around. Jessica was accepted into the Syracuse University S. I. Newhouse Masters Program in Magazine, Newspapers and Online journalism. She has been working on finding the funds to make that dream a reality.

The impressive thing about the Coker College Academic Awards banquet is that each table had students with stories like Jessica's. The students recognized last night were the top students on our campus and they are impressive. Those graduating with honors gave short overview of their research as they received awards. The research is cutting edge for those honor grads.

Dr. Pat Lincoln, the college Provost and Dean of the Faculty, coordinated this program to bring recognition to these academic all stars. It is likely that Dr. Wyatt summed up the feeling of many of the faculty who were in the room when he talked about the emotion that welled within him thinking about what these students had accomplished while on the Coker campus and what they are going to accomplish throughout their lives.

PHOTO CAPTIONJessica Barnes was sitting next Melinda Deyasi at the Academic Awards banquet. Melinda works closely with students who get up the courage to apply for programs like the Fulbright to guide them through the process.
Posted by rapsc at 4/21/2010 10:06:00 AM