The Coker College Dance Department will open their Spring Concert called Vantage Points at 7:15 on Thursday evening. Here is an announcement that was recently distributed by Erin Leigh, assistant professor - dance.:

Vantage Points Opens Thursday
The Dance Program is proud to present Vantage Points, the 2012 Spring Dance Concert, this Thursday, Friday and Saturday. The show begins with a pre-performance show and photo exhibit at 7:15 in Dance Studio 119 followed by the formal concert in the Watson Theater.

Dancers would love to see you there
Please come out and support the dancers and choreographers who have worked so hard to put this great show together. We look forward to seeing you!
Posted by rapsc at 3/21/2012 02:39:00 PM 2 comments: 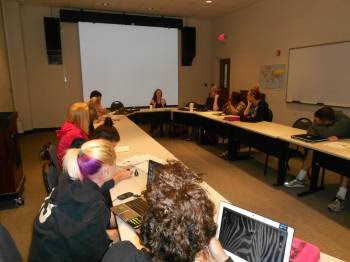 Suzy Fielders, a Coker graduate in communication came down from Winston-Salem, NC, to talk with the students about her life after Coker, which has included both graduate school and the working world. She is now with the Hays Group as a marketing person and has also opened her own Agency "Across the Horizons. 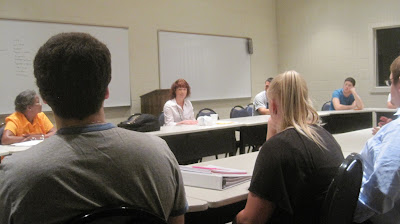 Jeanne Cerquone Yohn, who is the Glaxo Smith Kline in their executive communication area told members of the Coker College Marketing Communication class about the wide variety of opportunities that are available to communication majors. She has worked with a television station, a newspaper, trade publication, medical journal and now with a global company.Her daughter Hailey is a first-year student at Coker and a member of the Coker Women's basketball team.

Professionals give students an expanded view

As a Coker College instructor I am particularly grateful to people who will join our class to share some of their insights about how the "real world" works. Students also seem to really appreciate this expanded view and often spend more time after class getting additional conversation with the outside speakers.One of the projects on which the students are working is a marketing communication plan for the Inn and Scott Gupton of the Landmark has been to talk with the class on a couple of occasions.
Posted by rapsc at 3/15/2012 08:58:00 AM 3 comments:

This has been quite a week (only Wednesday) from the perspective of a communication professor. Monday there was a presentation of "Enoch Arden" that featured art video by Seth Johnson, a senior who is majoring in both communication and art. He combined his artistic video talents with the Piano presentation by Dr. Jun Sato and the narration of Dr. Graham Wood to bring "Art" alive on stage. Seth worked closely with Dr. George Lellis, Professor of Communication, who advised through the creation of the piece.

Then on Tuesday night Sean Clark and his mother spoke to more than 200 students in the Watson Theater about the difference a decision (or lack of a decision) can make in your life. When I say that Sean spoke, that gets right to the interest of the presentation. Sean's computer spoke for him, since an alcohol-involved CRASH has left Sean without use of his voice or much of the right side of his body. But, today's technology and the fighting spirit of Sean and his mother combine for a strong presentation about thinking before drinking. The students in attendance gave Sean and his mother a heart-felt standing ovation. This was a great example for speech students and also a great example for my Persuasion students, as they got to see a real-life example of persuasive appeals toward basic human needs (exactly the chapter we happen to be looking at this week).

And, tonight the Coker campus hears from the Executive Editor of the Pittsburgh Post Gazette, David Shribman, about the architecture of American Politics. After last night's wins by former Senator Santorum, this architecture should be of particular interest to all of us. This lecture is part of the Lois Walters Coker Lecture Series of Coker College.

For those interested, the news release announcing the lecture follows:

“We are delighted to welcome Mr. Shribman to campus this month,” said Coker College President Robert Wyatt. “He has built a career that is founded in the highest standards of a liberal education – ideals that have always been at the heart of the Lois Walters Coker Lecture Series.

“Day in and day out, his readers benefit from lessons learned through classical training in the arts and sciences – from literature and history to fine art, mathematics and science – coherently applied to complex issues of public policy and citizenship.”

“David Shribman represents everything that’s good about journalism, and none of the flaws that frustrate so many Americans,” said Washington Post columnist E.J. Dionne Jr.

“He’s driven by a thirst for understanding, a hunger for getting the facts right and in context, a passion for fairness, and a devotion to journalism’s essential role in making democracy work. With the depth and breadth of his knowledge about American history, he could win a contest with the very best American historians. And he is a thoroughly engaging human being. Coker is in for a great treat.”

Shribman, who was awarded the Pulitzer Prize in journalism in 1995 for his coverage of Washington and the American political scene, will speak on “The New Architecture of American Politics.” His lecture will explore the presidential campaign, considering, in particular, the way it reflects – and causes – changes in the way we conduct our politics.

Shribman became executive editor of the Pittsburgh Post-Gazette in 2003. He came to Pittsburgh from The Boston Globe where he was assistant managing editor, columnist and Washington bureau chief.

A regular panelist on the Public Broadcasting Service show "Washington Week in Review," Shribman is a frequent analyst for BBC radio. His "I Remember My Teacher," a tribute to the nation’s great educators, was published in April 2002. Mr. Shribman also edited, with Edward Connery Lathem, the book “Miraculously Builded in Our Hearts: A Dartmouth Reader,” published in 1999. He has lectured at universities and colleges around the country.

Shribman joined The Boston Globe after serving as national political correspondent for The Wall Street Journal. Prior to that, he covered Congress and national politics for The New York Times and was a member of the national staff of The Washington Star. A native of Salem, Massachusetts, he began his career at The Buffalo Evening News, where he worked on the city staff before being assigned to the paper's Washington bureau.

The annual Lois Walters Coker Lecture Series is a program established in 2000 to bring internationally recognized experts in science, history and public affairs to campus. Among those who have given the lecture are U.S. Senator Elizabeth H. Dole; Holmes Rolston, III, winner of the 2003 Templeton Prize for Progress in Religion; Lucille Clifton, former Poet Laureate of the State of Maryland; and Yale University Dean of the School of Forestry and Environmental Studies James Gustave Speth.

Walters Coker, now deceased, was the daughter of the late Theodore A. Walters, former Idaho Attorney General and Assistant Secretary of the Interior under President Franklin D. Roosevelt. She came to Hartsville in 1936 when she married Robert R. Coker, a leading agriculturist and businessman, who for many years headed Coker Pedigreed Seed Company. Robert Coker was the grandson of Major James Lide Coker, founder of Coker College and Sonoco Products Company.

Walters Coker loved and supported learning throughout her life. She earned a Bachelor of Arts from the University of Idaho and a Master of Arts in American History from the University of California at Berkeley. She taught in a one-room schoolhouse in rural Idaho, at a college in Washington, D.C., and in Hartsville’s public schools. In addition to researching and writing a history of Hartsville, Walters Coker served as the national director of the Tamassee D.A.R. School near Greenville and on the Darlington County School Board.

-------------------------------------------------
Coker College readies undergraduates for personal and professional success through a distinctive four-year program that emphasizes a practical application of the liberal arts as well as hands-on and discussion-based learning within and beyond the classroom. Coker is ranked among the “Best Colleges” in the South by U.S. News & World Report as well as The Princeton Review. Located in Hartsville, S.C., Coker is within two hours of the cultural, financial and recreational resources of Charlotte, Columbia, Charleston and Myrtle Beach.

the Coker lacrosse team is playing near Philadelphia as this is written. They are working hard in this first year of the sport on the Coker campus. It was a long road trip to add some new sights to the season. Coker baseball in action today. Softball is playing and tennis went against Division One Liberty today. The Coker athletes had a fairly busy spring break. They will likely be happy to start seeing other classmates on Sunday.

As break comes to an end the clocks are going forward, vining a whole new look to late afternoon. I think we will like that? this week is full of night events and lots happening. These next eight weeks will probably disappear but they will be full of exciting events on the Coker campus.
Posted by rapsc at 3/10/2012 04:19:00 PM 2 comments: