This Saturday will be a busy day in the library at Coker, unusual for a Saturday. It is busy because the college's strategic planning committee, appointed by President Wyatt, is having its first meeting. It is an all-day meeting that will set the tone for the planning process, which is to be completed by March. Earlier this week Dr. Wyatt was the speaker at the All-Member Lunch of the Hartsville Chamber of Commerce. He discussed some of the vision he has for the role the college will play over the next decade. The strategic plan will begin to articulate the strategies and tactics to implement a vision and continue the growth and success of the college.
Posted by rapsc at 9/26/2009 07:45:00 AM No comments: 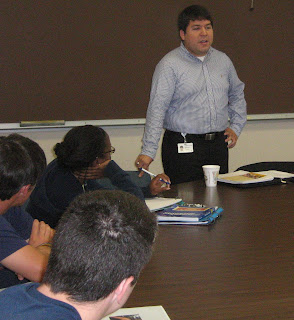 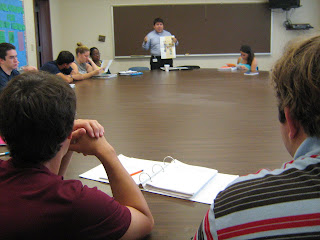 Marcos Sola talked with the Marketing Communication class at Coker on Thursday and his message hit the bulls eye from the instructor's (me) perspective. One of the instructional objectives I have for this class is that students be able to articulate an least an awareness of the workplace for marketing communication. Marcos furthered this goal. Two key messages from the instructor perspective -- 1) Make sure you take advantage of the learning opportunities in internships; 2) When you are an intern, be punctual and do work that helps solve problems. Students hear me say this but it really begins to mean something when someone only four years out of school gives them some real-world examples that this kind of thing is important.

Marcos was a Spanish major and a graphic design major at Coker, graduating in 2005. He was not in any of my classes, which is another reason I am really appreciative he took some of his time to discuss the importance of graphic design in the marketing communication process. At Sonoco, he works with Carolyn Johnson, who graduated from Coker as a graphic design major in the 80s.
Posted by rapsc at 9/24/2009 05:13:00 PM No comments:

The game between Coker and Francis Marion was exciting and was well played by both teams. It was such an even match that two overtime periods could not help make a decision. This Saturday the Cobras have another major encounter as they take on Lees McRae, assigned the top spot in the Conference Carolinas.
Posted by rapsc at 9/23/2009 02:30:00 PM No comments:

Coker at 23 int he nation, 3rd in Southeast in Soccer

Christian Stryker, sports information director for Coker, just announced that Coker has been ranked 23 in the nation in Soccer. The team is undefeated so far this year and tonight they will take on nearby Francis Marion University at the Coker College Soccer Field beginning at 7 p.m. Following is the story released by Coker Athletics:

In addition to their #23 national ranking, the Cobras jumped up a spot in the Southeast region ranking to #3. Coker is joined in the rankings by fellow Conference Carolinas schools Lees-McRae (#4 national, #1 region), Anderson (#11 national, #2 region), and Mount Olive (#10 region).

Coker will have to defend their national ranking right away, as the Cobras face regionally ranked #8 Francis Marion in a non-conference match tonight at 7:00 p.m. at the Coker College Soccer Field.
Posted by rapsc at 9/22/2009 02:13:00 PM No comments:

It is always fun to be part of the Open House events for prospective students. These students and their parents are facing the important decision of choosing a college. When you are in those shoes it feels like a daunting decision; it is a daunting decision. That is one reason I really enjoy being part of these events because there is good feeling when prospective students and their parents come to campus and put Coker in their decision mix. For some of them choosing Coker will be the best decision. For some, the visit will mean they will choose to take Coker out of the mix. Either way, the visit to the campus is a great way to help make a more informed decision. And that leads me to another reason I like being part of the open house when the opportunity arises.

Our Admissions Staff at Coker works very hard to provide students and their parents with an authentic visit. What the visitors see when they come for the half day event is pretty much what they will experience when they come on campus for their college years.

Finally, I really enjoy these events because I get to spend some time with colleagues who I don't get to see in the press of daily classroom activities. Listening to colleagues talking about their Coker experiences, which always focus around students, is energizing.

Volleyball opened at home on the Coker Campus

Like Christmas on campus this morning -- seems not a creature is stirring.

Thinking this morning about last week and a two days there was a sign outside the Joan S. and Charles W. Coker Library and Information Center about ETV Technology training. Never did any real investigation of that but as I went into the library I noticed the computer room was full and it looked like a good bit of activity. I am thinking that ETV was doing some training for those who run media centers and technology services in K-12 schools.

And, I was thinking about the role a college plays in fostering learning and action in a community. On a very surface level that was called 'town/gown' relations. There is more to this concept, however, and I think we begin to see it when groups from the community are able to use some of the campus resources for professional development. We also see it when the College and the Community combine some resources to expand the cultural offerings -- as is being done with the David Osborne piano concert on September 16 at the Performing Arts Center and even as is being done tomorrow with Jack Riggs, a Georgia author reading from his new novel, THE FIREMAN'S WIFE. That event is led by Hartsville's independent bookstore, Burry Bookstore. I had the opportunity to introduce another author at a similar event and that writer took a lot of time talking to students and others about both the process of writing and the process of getting published. Those are rich experiences and when you combine efforts their impact is much greater across the community.

Yet, there are other levels to this concept of college-community relationship and it appears they are going to be one of the subjects for more intense discussion as the campus works toward a new strategic plan. Dr. Wyatt, Coker's new president, has observed several times that he believes a college has a commitment to community that goes beyond sharing cultural events into the questions of how the "Academy" can be part of making the "Community" (the reason for the quotes is that we are not alway talking geography when talking community)better for ALL. Several times Dr. Wyatt has referred to a call of service to the Academy from the community and he is seems to be eworking to find ways of exploring this calling.
Posted by rapsc at 9/07/2009 09:03:00 AM No comments: 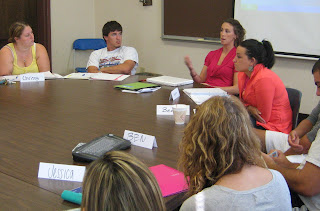 Leah graduated from Coker College in 2004 and made her first return trip to the campus today (9-3-09) as a guest lecturer in the Coker College Marketing Communication class. Leah Wright Burkett resides with her husband in Charleston and made the early morning drive to talk with Coker students about her job, the agency she works for and the process of finding and adding value to organizations for which you work. As always, I am hoping members of the class got as much from this visit as I did. Leah provided some "real-world information" that directly tied to some of the concepts we have discussed in class about what marketing communication needs to provide for clients. In addition, her tips about the job hunt, about finding a way to make a difference for your client and your boss, and about how to find satisfaction from your work day were really invaluable. As an instructor it is tough for me to overemphasize the appreciation I have for those who are willing to take their time to share the real world with students.
Posted by rapsc at 9/03/2009 11:23:00 AM No comments:

Marcom Class got to talk with first client

We are trying to take a sort of "real world" approach to the Coker Marketing Communication class. Today, the class got to experience an agency-client visit. Dr. Robert Wyatt stopped by to explain the challenge of providing Coker with an enhanced presence in the higher education marketplace. He opened the meeting with the information that Coker is currently enjoying it largest ever first-year class and its largest day population. "So, why do we need to do a better job of marketing?" was the question he asked. At that point he discussed a little about what the experts are saying concerning growth of the traditional college; a situation that is predicted to be, at best, static in the coming years.

One of the interesting aspects of a college like Coker is that a regular academic class can get more than an hour of the President of the college's time to enhance the experience of students. The students did their part in this experience by providing a steady line of questions to help them focus on the marketing mission that Dr. Wyatt is formulating.

Sometime next week several teams of students will deliver a S-W-O-T analysis that would be the first step in providing a marketing communication plan for this client. Now, the teams are trying to decide where to find particular groups of stakeholders, where to find current information the state of higher education and where to looking for those opportunities that will distinguish the growing institutions from other institutions over the next several years in higher education. As a matter of fact, that is just one of the things the strategic planning committees of the college will be attempting to accomplish over the next few months.

It is an exciting time to be part of Coker and it felt like the students in class got a taste of the excitement as they talked with the new President.
Posted by rapsc at 9/01/2009 09:11:00 PM 1 comment: