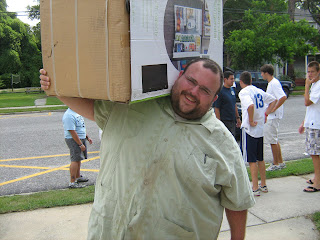 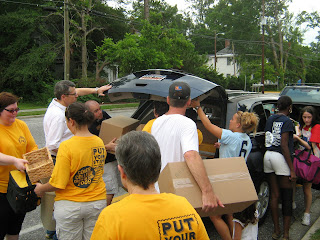 College is welcoming its largest-ever first-year class and a total of about 250 new students for the 2009/2010 academic year when you include transfers. One of the Coker traditions is to have what are called Commissioner Families. All the new first-year students are assigned a family as the first-step of getting to know Coker. An additional tradition is for the Commissioners, and Honorary Commissioners (those who are willing to help) to unload the cars for the news students and their families. This year, several of the fall athletic teams joined in the tradition and the move in flowed well, though for some it seemed like every incoming student was either on third floor Belk or third-floor Memorial -- especially those with the refrigerators and microwaves. Orientation continued over the weekend and Monday will be some more getting to know Coker and getting ready for classes, which begin on Wednesday.
Posted by rapsc at 8/16/2009 05:04:00 PM