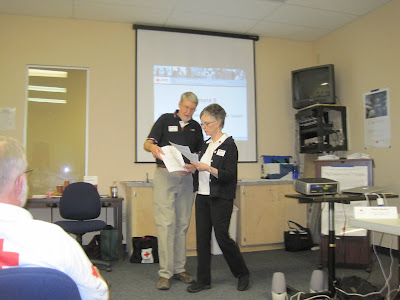 Bruce Newton and Judy Sperling Newton discuss a role playing exercise that was part of the American Red Cross Fundamentals of Disaster Public Affairs: The National Response training held this past weekend in North Charleston, SC. 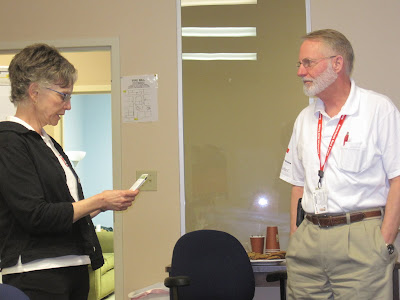 caption -- A role-playing exercise from the Red Cross Training with a volunteer from Rock Hill and Judy Sperling Newton, trainer.


One of the areas I have been wanting to explore further is public affairs response related to disasters. As part of my sabbatical semester at Coker College my plan was to fit in some training along these lines and the opportunity came this past weekend as I was able to participate in Red Cross training on the "Fundamentals of Disaster Public Affairs - The Local Respose" and the following class "The National Response." As a result of this training I hope I am moving closer to becoming a volunteer with the Red Cross with a specialty in the public affairs area. The training this past weekend was interesting and the people involved as trainers and participants were inspiring.

The trainers were a husband-wife team of Judy Sperling Newton and Bruce Newton, who have been volunteering in public affairs with the Red Cross for the past several years after retiring from their full-time careers. Their dedication to this volunteer calling is a case study in itself. Maybe I will ask for the opportunity to write it up one of these days.

The training was offered by the Low Country Chapter of the American Red Cross that is headquartered in North Charleston. There were 12 participants on Saturday and 16 on Sunday. Some of the participants were Red Cross employees who were expanding their expertise with the organization and others were Red Cross volunteers, learning more about how they might be able to serve this organization that shows up providing assistance in the forms of shelter, food, emotional support, other services when disaster strikes 365 days a year, 24 hours a day with services open to anyone in need. Truly, just a cursory study of this organization can be awe-inspiring.

From my personal, sabbatical perspective, this was a valuable training experience. I learned some techniques that will be useful in the Coker College communication classes that I teach. I also learned about what must be a very strong Masters of Public Administration Program with an emphasis in non-profit management that is run by the College of Charleston to which I will be directing some of my Coker communication students.

At the same time, I continued to be impressed by people who give back to their communities as volunteers, which is one of the areas of I am hoping to continue emphasizing during this sabbatical. For example, Betty was in the training from Summerville. She is a retired educator having spent well over 30 years in the classrooms of the low country. She has been exploring opportunities for volunteering and has found the Red Cross an organization that is helping her do meaningful volunteer work. Bill is in security at one of the major Charleston area resorts. He heard the Newtons doing some training and became interested. He is now a DAT team leader and continues to take on more volunteer responsibility with the low-country Red Cross. Each of the people in that room has a strong story involving giving back to the community.