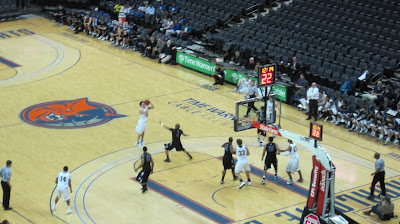 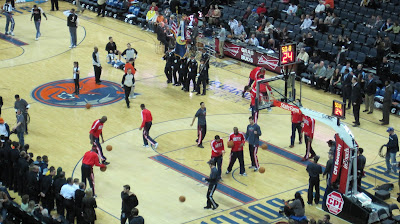 Coker's Athletics operations and Development Office joined forces to draw attention to the proposed new Coker College Wellness Center that is under consideration for the Coker College community. Coker's Women's and Men's basketball teams played against Barton early on Friday (February 11) on the floor of the Time Warner Arena in downtown Charlotte. Then, later that night the Charlotte Bobcats took the floor against the New Jersey Nets in NBA action. Coker had invited board members, friends, supporters and alumni to enjoy these events in Charlotte and get a look at some proposed drawings for new Coker Wellness Center, which will also include new basketball and gym facilities.

The alumni I got to talk with were excited about the higher visibility that Coker is taking for this type of project. They enjoyed meeting with some of the coaches and getting to talk with some of this year's players. It was an exciting, interesting event from both the fund raising and athletic perspectives.
Posted by rapsc at 2/12/2011 09:49:00 AM