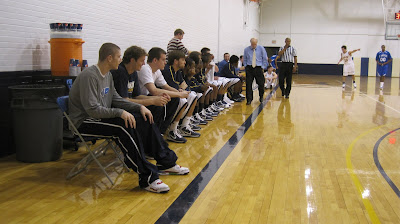 Would like to throw my congratulations to Coach Dan Schomotzer of the Coker College Cobras. He got his 300th win on Monday night at the Coker gym against St. Andrews. The Coker win snapped the St. Andrews three-game winning streak.

The following story is from Christian Stryker head of Sports Information at Coker College.


Coker's Schmotzer Earns 300th Career Victory
by Christian Stryker, Director of Media Relations and Sports Information, Coker College
1/4/2011
Read this article on the web at http://cokercobras.com/article.asp?articleID=2313.
HARTSVILLE, S.C. - In his first game behind the bench for the Cobras in 2011, Head Men's Basketball Coach Dan Schmotzer earned his 300th career victory at Coker College on Monday, January 3. Schmotzer led his Cobras to an 88-73 victory over Conference Carolinas rival St. Andrews Presbyterian College.
Schmotzer is in his 24th year leading the Cobras and his earned an overall record of 300-332. Currently, the 2010-11 Coker men are 3-6 overall and 2-1 in the conference, placing them fourth in the Conference Carolinas standings.
"As I get older here, I become really thankful for what I have," said Schmotzer. "It seems like yesterday that I won that first game here at Coker and now we are going on almost 25 years. It has gone by so fast; it's hard to believe I now have 300 wins."
"When I think about all the players that I have coached and the games that I have been a part of I am very thankful," he said. "Coaching at Coker has been one of the greatest experiences of my life."
Coach Dan and the Cobras will look to make it 301 wins on Thursday, January 6 when they take on Limestone College at home. Tip-off is scheduled for 7:30 p.m.
Visit cokercobras.com for the latest news and info on Cobras Athletics.
If you wish to be removed from all Coker College Athletics mailings, click on this link:
http://cokercobras.com/maillisthandler.asp?email=dpuffer@coker.edu&password=coker&delete=yes
Posted by rapsc at 1/04/2011 09:43:00 AM