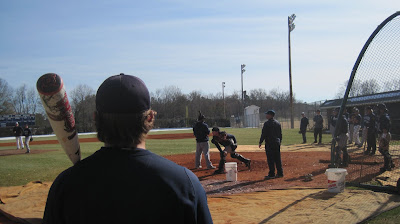 With snow still in the shadows of the right field wall and still slowly dripping from the home dug out on the first base line the Coker Cobra 2011 baseball team was at work on the Coker field the 16th of January. The team had been back in Hartsville for several days but an unusual Southern snow storm had them practicing indoors for most of that first week back. On the 16th there were getting a feel for the diamond and the 51 degree temperatures made it feel like the beginning of of baseball season.

To some, it may seem like this season is off to an early start but the opening day of the 2011 schedule is only about two weeks away on February 1. The opening home game will be on Wednesday, February 2, also known as Groundhog Day. I am certain that if you were to talk with Coach Dave about how things are going -- he would suggest that it certainly was not too early to start practice.
Posted by rapsc at 1/16/2011 02:23:00 PM