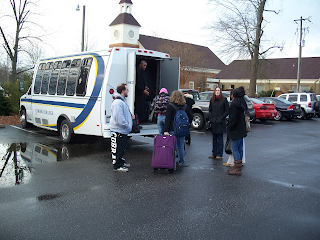 There was quite a bit of unusual activity on the Coker campus this morning (2-25-10) as lots of students were heading toward the parking lot with good size suit cases and heavy coats and jackets. Today is the day before the beginning of a very abbreviated Spring Break at Coker but it is still unusual for students to be moving quite that quickly before 8 a.m.

The students were all members of the Coker Chamber Singers who are heading to an action-packed Spring Break in New York City where they will be performing at several churches and in a couple of more private Chamber events. The students are excited and their flight leaves Charlotte later today. As I wished Will Carswell, the Director of Choral Activities, a great break he mentioned that NYC is getting some more winter so he knows there is an adventure in store. Adam Johnson, a senior communication major, said he would be blogging about the trip so maybe we can share some of the adventure with the Coker Chamber Singers.

And, the Singers will not be the only Coker students in NYC for the next few days. Jean Grosser, chair of the Coker Art Department, is taking a group of students on what is almost an annual tour of art museums and other venues in the city where she grew up. And, last night at the Coker Basketball game Dr. Robert Wyatt, Coker's president, said he was going to be attending at least one of the performances in New York at the home of one of the college's great supporters.
Posted by rapsc at 2/25/2010 08:14:00 AM