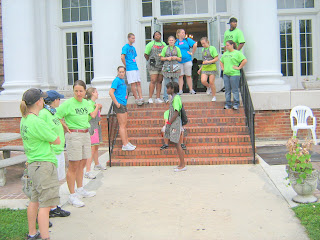 One of the traditions of Coker College is that on Move-In Day Commissioners and the Honorary Commissioners they get to assist them unload the cars of the incoming new students and take the belongings to the rooms. Parents are a bit surprised at first but really like that they don't have to carry televisions, hundred-pound suit cases, and other belongings up to the dorm rooms. The volunteers enjoy being able to make the connection with the new students as they start their own Coker Experiences. Here are a couple of photos from Saturday, 8-16-08.

It was move-in day for the first-year students at Coker College on Saturday, August 16, 2008 and Daniel Meyer is taking in one of the hundreds of refrigerators that came out of cars, vans and trucks. Daniel is one of the Coker College Commissioners. He was joined in his efforts by a group of "honorary"Commissioners that included girls from the Coker Volleyball Team, players from the Men's and Women's Soccer Team, some faculty and staff and even Jim Dawson, president of the college. This move-in tradition takes a lot of the work from the parents and friends who are helping the first-year student move on to this new stage of their lives. 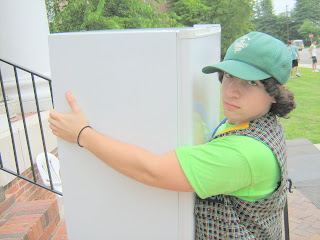