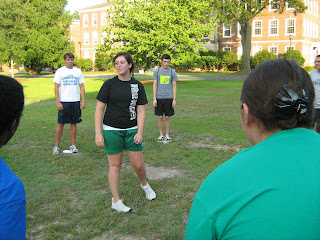 The Coker College Connection began on Sunday night and will run through Tuesday morning giving incoming students for the Class of 2012 an opportunity to make connections with each other and with the College. Dr. Robert Wyatt, the new and incoming president of Coker College greeted the students soon after their arrival on Sunday night. Though he does not start his Presidency officially until July 1, he was in town to work on a variety of Coker subjects.

The Coker Connection for 2009 is one of the largest that has been held with more than 70 students attending and several of them coming from out of South Carolina. The students participate in a wide variety of activities but probably getting to know one another remains the most important mission. The students played a variety of 'icebreaker' type of games as well as taking part in some of the events that are part of the Coker tradition of the Coker Olympics of Winter (COW Days events). The event, which is organized and conducted by the Students Services Department, seemed to be going well Sunday night as the "I Like My Neighbors" video should show: