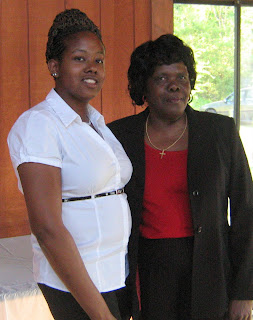 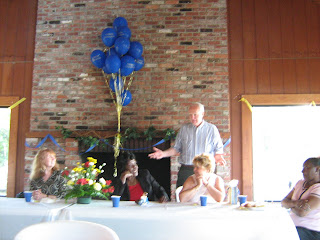 Coker College will be holding its 101st graduation on Saturday, May 2 and Frances Williams will be among the graduates. She is a typical graduate of Coker's Evening Extended Studies program and she is a special graduate of that program. Most of the students in the Evening Program are what we call "non-traditional students." In that way, Frances is pretty typical. But there are some unique aspects to the Coker college career that Frances has forged.

Frances had already had a career before she opted for the Coker education. She spent a full 20 years in the United States Army and retired from the Army as an E-7. In the Marines we called them Gunny and I am not sure what the rank equivalent is for the Army. I do know that E-7s are the supervisory giants who carry a lot of responsibility for the effective operations of their units. That is one reason I was a little surprised when Frances and I were talking the other night at a Roast in honor and I suggested she apply for a supervisory position I heard was open. She said something like, 'I'm not a supervisor.' A 20-year military career and retiring as an E-7 -- that woman is a leader. But, Frances took a unique approach to getting her college education. Coker employees have the benefit of being able to pursue their education at Coker without major tuition expense. So, Frances has been a member of the Coker housekeeping staff for the last several years. Working by day - and sometimes by night -- helping to keep Coker looking like one of the most beautiful campuses in the country. Mondays and Thursdays she was in night class, pursing a degree in Criminology. Her determination, work ethic, intelligence and persistence will pay off in the degree on Saturday.

We are saying goodbye to Frances this week. She is actively seeking to put that degree to use as she looks for jobs in fields like police work and other related fields where she can "help people." When Frances and I have talked about what she is going to be doing next, after she jokes about "get a job," she quickly gets serious with the added phrase, "I want to help people."

As I noted in a letter of recommendation that I wrote for her, whatever organization ends up hiring Frances is going to get far more than they will be paying for because she is now a retired E-7 and a college graduate.

That is a quick story of Frances, and one of the great things about the Coker graduation is how many other stories could be told of typical Evening School students who are also unique and different and who will also be giving whatever organization hires them more than they will ever get back in salaries.

One photo shows Frances putting up with a little roasting from Russ and the other is Frances, right, with a friend and coworker.
Posted by rapsc at 4/28/2009 08:29:00 AM