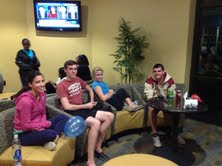 Students enjoyed some food, snacks, lots of post-election results coverage and time with each other on Tuesday at the Coker College Student gathering area. SGA came up with the idea and did a nice job of putting the event together. And, they called it right when they decided they might get a crowd if they had some food. Pizza and tacos were the staples with some celebratory cake to add to the mix.

Hartsvillian Michael Baxley joined the students for a couple of hours duirng the viewing. Judge Baxley, he is a State Circuit Court Judge, said he was interested in getting a student perspective on the presidential race and said he enjoyed his time around the younger people.  Several students in the 8 a.m. speech class said they had stayed up for the results though several did admit to falling asleep before the election was called. A couple, however, had seen the concession speech and the victory speech and they still stayed awake for our review of the informative speaking process.  We did view clips of those two speeches because they did such a great job in demonstrating the power of a well presented talk.