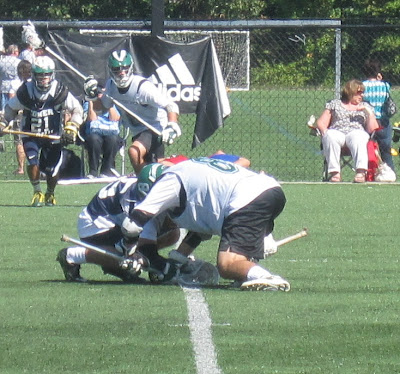 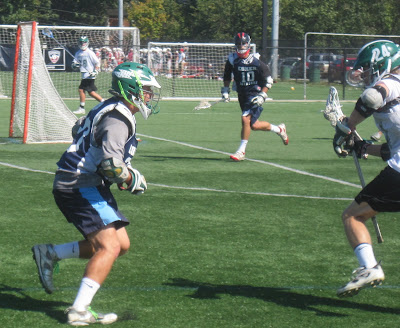 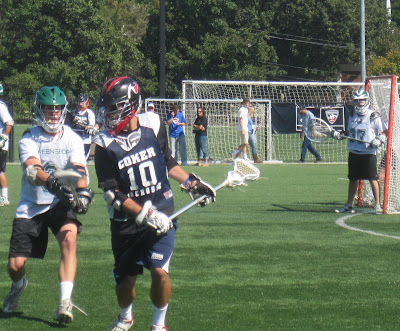 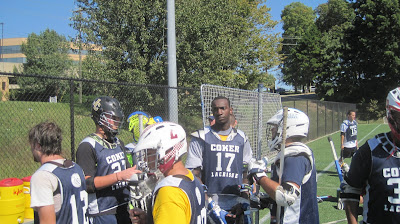 The Coker College lacrosse team reached another milestone on Saturday, October 8, 2011 as they played their first intercollegiate lacrosse in a series of scrimmages at the Greensboro Fall lacrosse tournament. Coker played Guilford, Ferrum and UNC-Greensboro in three forty-minute games.

How do they do? They did not win. They did however play some excellent lacrosse with two of the games decided by one goal and the other by two, despite the fact that Coker had a midfielder in goal as both goalies were not able to play in the scrimmage. The team, which just came onto campus this fall, looked like a team. The guys worked well together and executed well. Defense was especially good as each of the three scrimmages wee low scoring, in a sport that can often have scores in double figures, Saturday's games were in the 4-3,5-4,6-4 type of scores. One other exciting aspect of this three-game scrimmage was the following the lacrosse team had. There were parents and relatives from Florida, Pennsylvania, Maryland, South Carolina and probably a couple of other states cheering on the Cobras. In the small-world category, one of the mothers is a graduate of Rome Catholic High School of Rome, NY -- the same school from which I graduated.

This year I have the opportunity of being what Lynn Griffin, Coker Athletic Director, is calling a faculty mentor for the team and it is fun getting to know these guys in their lacrosse environment. Driving the bus to Greensboro is not really in the faculty mentor job description but it was a way to connect with the team and reconnect with some long-ago memories of my own very inadequate lacrosse playing days. The game was intense back then. Heck, lacrosse was a way the Indians used to settle serious disputes instead of going to war so it has always been intense. But, the talent, the speech, the athleticism of today's players is amazing to watch. It is a very different game from the days of wooden sticks.

Yesterday ended the Fall Season and now, except for study halls, the lacrosse team is anxiously awaiting the coming of second semester when they start their official lacrosse schedule, opening with Shorter College of Georgia.
Posted by rapsc at 10/09/2011 10:49:00 AM