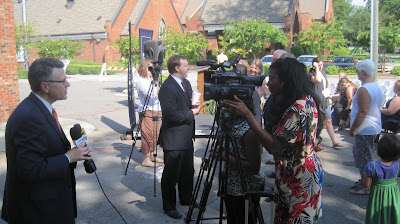 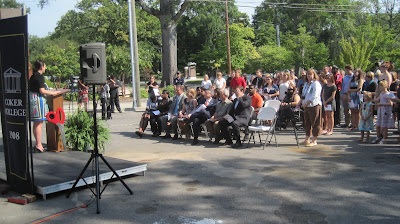 Shared values of community are part of the uniting theme between the city of Hartsville, S. C. and Coker College as the two organizations work toward building a strong town/gown relationship. A very tangible example of this effort was unveiled on Tuesday, August 9 as the ribbon was cut on new apartments in downtown that will be home to 20 Coker students in apartment-like residential living. Dr. Robert Wyatt, president of Coker College, told the crowd that he looks forward to the many ways Hartsville and Coker can become an even stronger partnership because he sees the best of community in both the city and the college.

More than 200 people were on hand for what was an exciting event for downtown Hartsville as Lenora Lefew, director of the Hartsville Downtown Development Association told the crowd that if you were taking "Downtown 101" you would quickly find that downtown residential living would be one of the major requirements. She said the community is excited to welcome the students into the Hartsville downtown.

Jason Umfress, Dean of Students, said that as the relationship between Coker College and Hartsville continues to strengthen, his goal would be see Hartsville recognized as one of the nation's top college towns.

Steve Avant, who owns the buildings in which the new apartments have been created, said this present is a sort of visit to the past. Much of the space that is now the Coker apartments was decades ago the Marguerite Hotel, used for business people on trips to markets in Hartsville. There are many stories about how quickly this project became a reality but Steve Avant summed it up by saying "while I have some visions for the growth of downtown I am only able to implement the vision by responding to the dreams and desires of people in the community."

The students who have seen their new living arrangements are even more excited now than when they found they had won the room draw for the new apartments.

As the quick ribbon cutting broke up and the tours began the prevailing buzz from Mayor Mel Pennington and Lenora Lefew and President Wyatt and many community members and students was how can we keep this partnership building and this excitement growing.
Posted by rapsc at 8/09/2011 10:38:00 AM