Kennedy wants to be a journalist 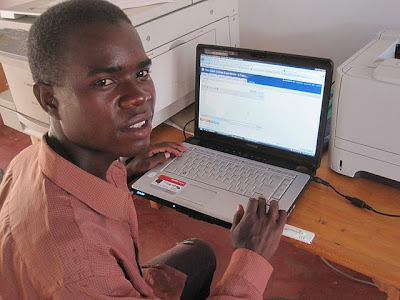 Kennedy Adera of Muhuru Bay, Kenya is a hard working student who really hopes some day to become a journalist. He knows he has his work cut out for him because he has what seem like insurmountable challenges.

He is a good student with top grades from his primary school but in Kenya, you have to pay to attending secondary school -- even the government schools. The costs are not cheap and his family was not able to afford one of the good schools. He is now staying with a family friend who is helping him attend a secondary school called Nyaykondo School that is new, not yet accredited and is using other secondary students as teachers. So, he knows getting into a college program will be difficult.

Kennedy 18, says he is struggling to make it and should have two years left for secondary school if he can continue to find the funding. Then he would love to go to university or college but he knows there is another challenge -- because right now he has no idea where those funds would come from.

But, he continues this dream because he would love to be a role model for others in Muhuru Bay and be recognized as the well-respected international journalist who was born in Muhuru Bay, Kenya.

Kennedy is sitting next to me as I tell his story and we have discussed his next step. He is going to control that which he can control and become the recognized school journalist from Nyakondo, attempting to get the story of his school to others in the school and the rest of Kenya. I did get to visit Kennedy at his one-room school house that is divided into classes with some screening material. It is obviously not one of the better secondary schools in Kenya -- according to the Principal, barely even adequate. School fees for the Secondary School are between 20,000 and 40,000 Kenya Shillings at about 80 shillings to the dollar. Most people in Muhuru Bay do not have that much extra around. And, even when they do there are the extra expenses like clothes, medical care, travel to and from the school if it is away. We take a lot for granted here in the States with our relatively free public school system.

I got to meet Kennedy because he met my daughter Eve when she began her research and intervention program at the WISER Girl's School for Education and Research back in 2008. She has kept up with his progress and thinks he has great potential. So, we just had a conversation about journalism for about an hour on a Saturday afternoon (March 26, 2011. In that conversation I was able to introduce him to the internet and he is amazed as I am that you can find 2,240,000 Google hits on Kenya Newspapers in less than one second. He does not have regular access to a computer and had never seen that before. He then wanted to see to the DAILY NATION, Kenya's leading independent news paper and the the Kenya Broadcasting System and when we were both interested in the story about the 1953 destruction of a village by colonial authorities that was in the Nation or the Standard or was on All Africa.com.

I know I was totally taken with Kennedy and his passion for becoming a journalist. Hope he has as much fun talking with me as I did talking with him. What an unexpected pleasure for this sabbatical trip -- and he sat still for my first lecture in Writing for the Media, how to write a summary lead.
Posted by rapsc at 3/26/2011 11:04:00 AM