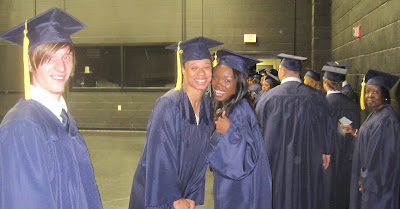 Graduates getting into line to join the procession into graduation. 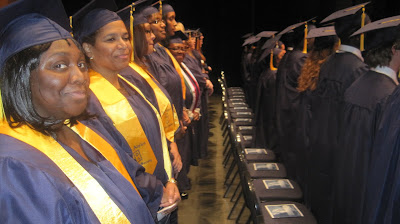 Graduates on stage awaiting the start of Winter Commencement 2011


Coker College held its second Winter commencement on December 16 at the college's Watson Theater. Approximately 78 students received their degrees at the ceremony. Dr. Robert Wyatt, president of the college, told those gathered that since this was the second Winter graduation it could now be considered a new Coker tradition.

Charles Sullivan a member of the Coker College Board of Trustees since 2002 was awarded an Honorary Doctor of Humane Letters as part of this ceremony. He spoke to the graduates about four concepts to take into their post graduate life -- concepts that have been important to his more than 40 years in industry. Tenacity, Personal Integrity,Passion and Vision are concepts that he noted they had exhibited to achieve their degrees. He said they were concepts that would help them achieve even more in their lives.
Posted by rapsc at 12/17/2011 08:48:00 AM