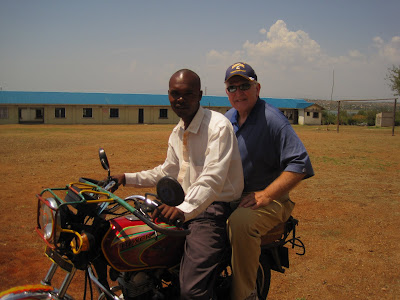 
"You never know a place until you have been to that place." Now, I know for certain that is true but I am a bit more convinced that when you know a little you discover how little you know. As I continue on my sabbatical journey in this Spring Term of 2011, I am beginning to believe that this idea may end up as the overall thttp://www.blogger.com/img/blank.gifheme. As I have a little bit more time to reflect on things like community thinking and building; classroom teaching and living life in this second half, I am becoming increasingly aware of how much I don't know but would still love to learn.

As I was flying from Charlotte to New York to Amsterdam to Kenya I finished listening to the new book by David Brooks, THE SOCIAL ANIMAL: The Hidden Sources of Love, Character and Achievement. (It is a solid read but not really the subject of this post.) David Brooks used the line in the book that was something like, "You can never know a place until you have been to that place." As I landed in Nairobi, Kenya and then headed out to Muhuru Bay, Kenya that short passage began to take on real meaning. And, as I rode the motorbike from the WISER compound to the center of Muhuru Bay that they call Customs or took the turn to the church in sight of the Tanzania/Kenya border or went in the other direction toward the Winjo area of Muhuru Bay it became apparent that there was so much to learn.

In future posts, I hope to expand on this idea. It is becoming apparent to me in this time of research and reflection that such different events as teaching Inga's middle school students about speech introductions and watching Eve's enumerators interview under trees in Kenya, and participating in public affairs training with the Red Cross, and working on community innovation in Hartsville all begin to demonstrate for me that the more you begin to know, the more you really need to learn.
Posted by rapsc at 4/06/2011 08:48:00 AM