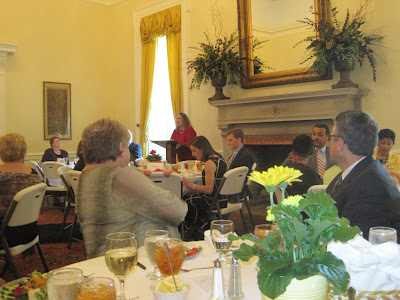 Coker College annually has a small dinner to honor the graduation speaker and the winners of the Algernon Sydney Sullivan award. That dinner was held April 30 honoring Emerson Gower, who was being conferred an Honorary Doctor of Humane Letters award by Coker College for his long career of community service. It also honored Clayton Richardson, who was named the Community Algernon Sydney Sullivan Award winner for his untiring efforts to make Hartsville, S. C. one of the best communities to live in -- for EVERYONE. Robert O'Hara, who is heading to Law School in the Fall, was also honored as the campus winner of the Algernon Sydney Sullivan award. Robert is also known as a "Mr. Coker" for his involvement across campus and his active engagement in the classroom.

Photo caption: Dr. Patricia Lincoln, Coker Provost, served as the emcee of the Pre Graduation dinner that was held at the Drengalen House on the Coker College campus.
Posted by rapsc at 5/01/2010 07:15:00 AM