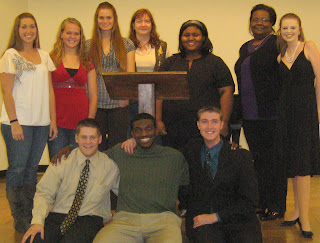 The 2009 Speech Contest had ten contestants and in my mind that means it had ten winners. The ten students who took part "stepped out of their boxes" and stepped up to a significant challenge. This contest is going to make each of them better when it comes to public speaking.

For three of the contestants, the winning also meant some prize money. The Coker College Speech Contest is a co-curricular event with the Department of Literature, Language and Communication and Students Services & Leadership. The prize money for the event was provided by Student Services.

Matthew Blewitt, presenting a motivation speech on escaping your personal and societal box, was the first palce winner and takes home $150. In second place was Caleb Dunlop, who was speaking on the need to send more troops to Afghanistan. Third place went to Derek Bailey, who spoke on the normal abnormal events at family reunions.

There were some interesting speeches from all of the contestants. Jill Giguere talked about the myths we associate with some mental illnesses. Becky Dillon had a persuasive speech about allowing women into combat roles in the military. Hannah Jackson told the audience the importance and rewards of volunteering. Margaret McCoy entertained with the battle between the Snap/Crackle/Pop gnomes and the Kibler Elves. Elizabeth Carawan, who happens to have red hair, told us about the reputation of those with the gene who are said to have stolen the fire from hell. Rachel Minus described the magic of knowing American Sign Language and Elizabeth Gainey told of the challenge of reaching two childhood dreams, that of being a social worker and a teacher.

The judges for the contest were two members and officers of the Hartsville Toastmasters -- Ray Schnell and Bruce Eide (both TM contest winners themselves); Veronica Gallo, a Coker alum and winner of the 2006 Coker Speech Contest and Lisa Potoka, direction of student activities and leadership. Dr. George Lellis of the Coker Communication Department was the timer. The major rule of the contest was that speeches had to be between four minutes and thirty seconds and seven minutes.