The Coker College campus is coming alive before 8 a.m. -- a rare occurrence in the world of Academia!

Graduation begins at 8:30 for the class of 2013 and the excitement is great for those who have accomplished this major life goal and those family, friends and colleagues who supported them through it.

Yesterday I heard a news report about 2013 college graduates. They tend to fit a certain profile. Those looking at the Coker College Class of 2013 are not going to see that stereotype. We have a diverse class, helped in part by those adults students in the Coker ALPHA program who have attained their degree through the evening program.  We also have a high proportion of Pee Dee area/South Carolina residents in our class and they are going to be of several races, multi-gendered, and age diverse.  Women will dominate in numbers but we do have a high percentage of males graduating - against, we are a bit against what is now being considered the norm.

Forget about the stats. When it comes to graduation the most important matter is the CELEBRATION that all the graduates should be having for becoming one of the approximately one percent of the world's population holding a college degree.

Andrea Hunter, in photo below, was at the store getting some water and snacks to fortify herself for the Coker College graduation. 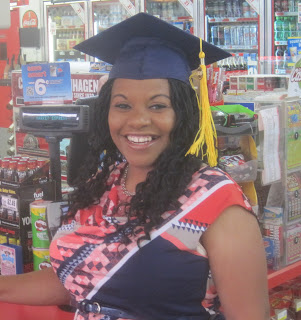 And there will be some graduates missing from today's ceremony as the seniors on the Coker College baseball team are competing in the NCAA Division 2 Regional Tournament. Dr. Wyatt says he will hold a special graduation ceremony for those guys at the tournament site on Sunday. Some of those guys in this bottom photo are graduating. 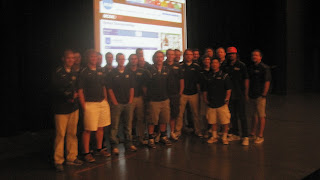