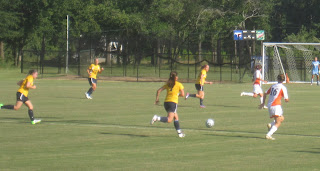 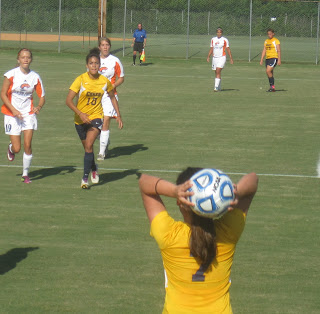 The Cobra women had a great game on Tuesday afternoon and topped regionally ranked Clayton State 3-1. The story of the game, produced by one of Coker's graduate assistants, follows.  In addition, the Coker women's golf team had one of their best finishes in their young history coming in third in a tourney in Anderson, SC.


HARTSVILLE, S.C. – The Coker women's soccer team captured the first win of the season after defeating No. 7 regionally ranked Clayton State 3-1 on Tuesday (Sept. 11).
The Cobras wasted little time, scoring quickly and swiftly in the first half.  Katie Copper set a perfectly directed cross to the streaking Jalynn Fort, who navigated a head shot around Laker goal keeper Laoise O'Driscoll.  With not even 15 minutes off the game clock the Cobras struck and took a 1-0 lead.
Not only did this date mark a day of remembrance for America, but it also marked a special game for sophomore Kelley Godbout.  The forward from Mathews, N.C. had two goals on three shots for the Cobras.  The first goal for Goudbout came in the 50th minute of the second half, when she took a cross from Fortt and headed it into the back of the Laker net.  Her second goal came in the 77th minute when she blasted a shot to hit nylon in the corner of the net, and set the Cobras up with a comfortable 3-0 lead.
The Coker defense was relentless for the entire 90-minutes of the game.  Goalkeeper Lizz Morris had 11 saves, and only let one through out-of-23 Laker shots.
Coker will looking to start a win streak as they hit the road for the next three competitions.  The first of the three comes on Thursday (Sept. 13) as they travel to face Newberry College.  That game is set to kick-off at 4 p.m.
McDonalds Player of the game: Kelley Godbout

Following is a story about the Cobra's golf team:


ANDERSON, S.C. -- It was a record setting day for the Coker women's golf team, as they finished third in competition, and shot a team total of 651 after a two-day tournament.
Coker women's golf set a new team record on the first day of the event after they shot a team total of 330.  However, the Cobras were not satisfied.  The team finished strong in the second round shooting 321 and setting a new Coker women's golf record for tournament play.
Krista Thorpe shot a 78 (+6) for the Cobras, which was the best individual score on the day as well as her career.  Right behind Thorpe was Sara Allen and Taylor Demby, who shot scores of 80 (+8) and 81 (+9).  Completing the pentagon for the Coker team was Mallory Thompkins who shot an 82 (+10) and Jessi Mackenzie who shot a 90.  Thompkins and Thorpe sunk three birdies for the Cobras, while Demby and Allen contributed 2 birdies and 18 pars each.
The next competition for the Cobras will come on September 29 when they participate at the Lady Bearcat Invitational in Hilton Head Island, S.C.