Cobra lacrosse team marches onto field for first game in the Coker College lacrosse history. The team came out with a 14-7 victory. 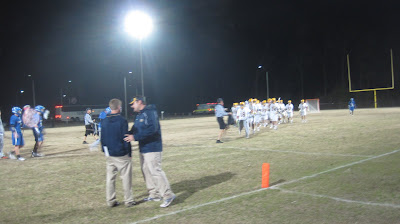 A couple of hundred people braved the cool temperatures to take in the first lacrosse match in the history of Coker College. From the sounds of the cheers throughout the game, they were excited to be part of this new Coker tradition. It has been a lot of years since I have viewed lacrosse, except on the television screen. After being on the SUNY Cortland Red Dragons (usually on the bench)team for a year, I have always believed lacrosse is my favorite sport. After watching the Cobras in their opener, I am still convinced.

The game requires skill, speed, strength, and a certain disregard for a sense of personal security. It is exciting to watch and should be a great addition to the roster of sports at Coker College in Hartsville, South Carolina.

Morning News sports editor Mark Haselden has a great end-of-game story featuring the Captain of the Cobra team.
Posted by rapsc at 2/11/2012 08:18:00 AM