The Centennial Has Ended - Next 100 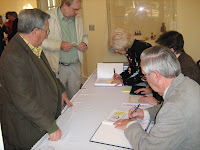 Coker College began its Centennial Celebration in January 2008, celebrating 100 years of higher eduction in South Carolina. Today, December 4, 2008, the Centennial Celebration cane to an end with the burying of a time capsule that will be opened in 50 years. The two student body presidents, Andrew Mitchum and Whitney Watts, in attendance for the burial said they are looking forward to the unearthing in 2058, when both will be 72-year-olds. Dr. Dawson, the President of Coker College, also can be heard on video to say he will be here too but he will be considerably older than 72 when 2058 rolls around.

The Centennial was a fun ending and it was especially meaningful because Dean Malcolm Doubles, who was the Dean and Provost at Coker for 21 years was signing his just-off-the-press 350-page history of Coker called IN QUEST OF EXCELLENCE, A HISTORY OF COKER COLLEGE ON ITS CENTENNIAL.

The Coker College web site will contain a lot of the stories of the various events that were held to commemorate the Centennial. Setting the tone for the Celebration was the opening Spring Convocation featuring Dr. Walter Edgar an historian from the University of South Carolina, who told what life was like in the Hartsville, SC, of 1908.

I have only been full-time teaching at Coker since 2000 though I did have several terms of adjunct experience on the way to getting the full time position. But through my wife's family the connection to Coker goes back to the 1950s as I think all five of the McLamb girls might have attended Coker.