Debates get some viewers 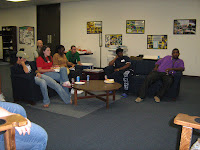 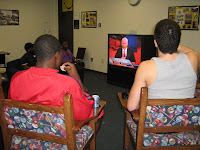 One of my recurring soap box presentations this semester has been the "interesting" times in which we are living in our country. So, how to make that connect with students. One idea, which I used four years ago, was to invite students to a debate viewing party. Sometimes, when you add food, you can get some interest. So on Tuesday night about 12 students came in to watch the town-hall style debate between Senator McCain and Senator Obama. A couple of students wandered in later after hearing about food but many stuck through the debate's nearly 90 minutes. We were much like the audience in the debate hall, polite, watchful, listening. We did not spend time analyzing the comments or even voting on a debate winner. My observation was that the students were listening closely and they understand the importance of this election. I think several of them were glad they invested the time -- and not just because of the pizza or tacos.
Posted by rapsc at 10/08/2008 08:58:00 AM