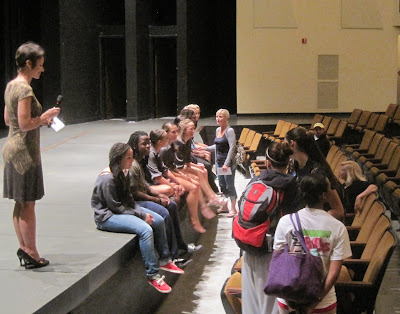 caption for photo: Following the dance concert Angela Gallo, associate professor of dance, had the choreographers answer questions about their pieces from interested members of the audience.


The Fall 2011 Student Choreography Showcase opened in the Watson Theater on the Coker College campus on Thursday evening. It will continue at 7:30 p.m. on both Friday and Saturday nights, October 7 and 8.

The dancers go by my office door all day, all week, including weekends. This close proximity to the Coker College Dance program has helped me become a dance fan. This year's Fall Choreography Concert is another event that makes me glad I am a fan. I hear people say that modern dance is not for everyone. That may be but performances I watch by the Coker dancers make me wonder why. Modern (heck, dance in general) is a complete performance with exquisite movement, intrepid imagination, powerful images and intriguing story lines. And, much of the interpretation is generally left up to the viewer -- providing frameworks for us to build our own stories. The student choreography is an example of that thesis and it was enjoyable watching it performed in the Fall Concert.

Males have long been a part of the dance program at Coker but to have four guys on stage at the same time almost made it feel like we had a visiting company. "Mental Enslavement" was the title of the piece choreographed by Italy Welton and performed by Dache Green, Ty Rogers, Daniel Stevenson and Keon Wilson.

"Break Out" was a duo of Kelsey Grimm and Kaycee Weaver and they were the choreographers for the piece. Watching the performances on Thursday evening it struck me how the pedagogy of project-based learning plays out in this student choreography. Two of the pieces had multiple choreographers and the collaboration involved in the creative process has to be a great learning opportunity.

"Bitter Words and Forgiving Hearts" was the other multi-choregraphed piece as the three dancers - Megan Stone, Devin Jennings and Alicia Nelson were also the choreographers. That piece closes the show.

The next major dance event on the Coker Campus and in Hartsville will be the October 20th performance by the David Dorfman Dance company in a show titled "Profits of Funk."
Posted by rapsc at 10/07/2011 07:21:00 AM