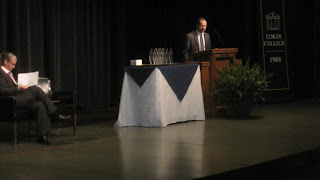 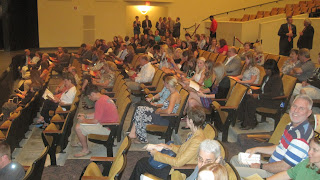 Coker College held its Honors Convocation for the 2011/2012 academic year in the Watson Theater on Monday night. Dean Tracy Parkinson, provost of the College, was hosting his first Honors Convocation and he told the audience one of his reasons for choosing Coker was the unique way the Colleges brings a focus to its Academic Excellence. He was referring not only to the Honors Convocation but to the "Celebration of Academics" that is taking place all week at the Hartsville, SC-based college.

There was recognition of Academic Excellence as those who have achieved the Dean's List and the National Honor Society and the Who's Who of Colleges and the Senior World Scholars and the Susan Coker Watson scholarship winners stood amid applause.

In a very personal touch, the seniors who will be completing their four years at Coker with honors were introduced to the audience by their faculty mentors. Those receiving College Honors after completion of a major Honor's Project include Rebeca Armentrout in Biology, Monte Jackson and Ivy Aldrich in English, Marlin Ketter in Music Education and Hannah Jumper in Psychology. Hannah is also a communication major.

Scholar Athletes
A most impressive list of student athletes was also honored as Academic All Conference members for the Conference Carolinas. Among those honored were Brendan Burns, Francisco Suarez, and Matthew Bowman of the baseball team; Jonathon Gardner of the basketball team; Thad Sulek, of the cross country team; Diego Polo and Matthew Kreider of the golf team. There were three men's soccer players -- Noah Lascell, Jonathan Pent and James Sweeney and Robyn Risher of the Women's cross country team. The women soccer players were Morgan Hartline and Sarah Kinsey. And Jennifer Sanborn, Katelyn McElveen and Rebecca Dillon received the all-conference award for the softball team. Becky Dillon, who is a communication major with a minor in both Spanish and Business was the Murphy Osborne Award Finalist from Coker. And, it did not stop there.